To commemorate the milestone achievement of 25 years of operation, NHV created a celebratory campaign to reflect on the vast achievements that the company has accomplished the past 25 years.

We hosted a simultaneous companywide event, in which 9 NHV bases across Europe and West Africa invited employees and their families. The event included entertainment for kids, dinner, and awards as well as a presentation.

The various posts that were published included some significant company history, entertaining stories, messages from our key partners and a fun follower’s giveaway!

To summarise the campaign, this article will reflect on everything that NHV was published in the campaign and accomplished these past 25 years. 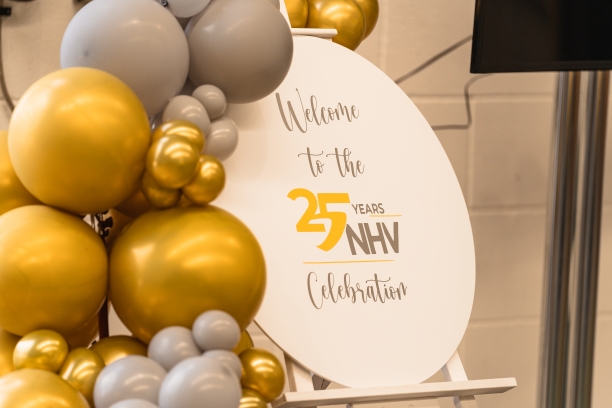 In 1997, co-founders Eric Van Hal, Jef De Kinder and William Wilford started the company after they realised there was a gap in the market for crew transfers. During bad weather conditions, when ships couldn’t transport harbour pilots, they would call the army to assist them with their helicopters. The entrepreneurial trio realised that this provided a commercial opportunity for crew transfer flights, and the concept of NHV was born!

On May 15, 1997, NHV officially started operations from Ostend, Belgium using the MSN 6510 Dauphin N3, OO-NHV. Since then, NHV have grown to be a specialised B-to-B helicopter operator across a variety of sectors and with a strong geographic presence in Europe and Western Africa.

NHV expanded operations into Esbjerg Denmark when NHV performed the first flight on the 1st of February 2003.

In 2006 NHV started working with the Dutch Coastguard and launched our service to transport shipping pilots on & off vessels.

In 2008 NHV started out in the UK with operations in Norwich. West Africa was also introduced into the portfolio in 2009, starting with offshore flights from Ghana, using the Dauphin N3 and then bringing the H175 to the fleet.

NHV started operations in Nigeria in 2010, where NHV introduced the Leonardo AW139 for Oil and Gas flights for Shell.

In 2011 NHV started flying SAR operations. Since then, the total number of day and night rescue missions that we have performed is 1040 across both our SAR Bases: Rotterdam and Den Helder.

NHV’s Abidjan base in the Ivory Coast was opened in 2012, where we are proud to fly with the Airbus AS365 N3 Dauphin.

In 2013, Ardian joined forces with NHV Group to acquire a majority shareholding. This milestone allowed NHV Group acquire the Blueway Group in 2014. With this acquisition NHV became one of the largest European helicopter operators.

Aberdeen’s base opened in 2015, here they became established as the Airbus H175 market leader.

Safety is a top priority for NHV, we are proud to have been involved in the development of our ISO9001 accreditation for Quality, Health, Safety and Environment which we attained in 2018. This accreditation is important since it demonstrates our continuous commitment to quality, accountability, and our mission towards continuous improvement.

In 2019, Brexit presented the UK with several legal challenges, not least of all making sure that our licences to operate were maintained during this period of uncertainty. NHV were granted an Air Operator Certificate by the UK Civil Aviation Authority and added 7 aircraft under its UK AOC, all of which were previously registered under NHV’s Belgian AOC. Gaining this UK AOC was essential to ensure that NHV could continue to operate flights from our existing UK bases following the UK leaving the EU.

In April 2020 NHV opened a new base in Midden-Zeeland designated to support offshore windfarm activities in the region. Commencing these operations signified the start of NHV’s long-term strategy to diversify our offering into the Offshore Wind Market to broaden its range of services to the energy market and grow our renewables sector.

At the end of 2020, NHV opened a new base in Blackpool for the oil and gas market to provide passenger transfer services in support of their client's East Irish Sea operations. In the UK, NHV became the launch partner of the Leonardo Helicopters AW169 aircraft.

Across our three UK bases, NHV have a market share of almost 25%.

A major milestone in the development of NHV was on December 16th, 2020. On this date NHV finalised the sale of six H155 aircraft in its fleet to Air Greenland.

Starting in January 2021, NHV won the Bundeswehr, German Army contract, in which NHV established operations in Germany. We provide maintenance solutions for the management and implementation of maintenance and repair activities, material supply and airworthiness as well as training to the Air Force pilots.

In 2021 we differentiated our offering further, by establishing our Training Academy, which is an academy providing both internal and external training to Pilots and EASA approved Part 147 Maintenance Training & Examination Organisation, providing maintenance technicians training from Basic B1 & B2 to Type Trainings on various aircraft types. At NHV, we want to ensure the industry produces a great supply of new and upcoming talent not only with pilots but the whole range of supporting technicians, engineers and staff and the Training Academy is a renowned world class centre of excellence.

We wouldn’t be the company we are today without the continued commitment, passion, teamwork and ensuring always safe flight operations from our employees, past and present. Thank you to the NHV Family for your continued support and the assist of our clients, partners, suppliers.

25 years of NHV also symbolises a 25-year partnership between Airbus and NHV. We started our operations using the Dauphin N3 and expanded our fleet to encompass the H145 and the H175, in which we were the launch partner and recently completed 70,000+ flying hours, a whopping 50% of the total 140,000 H175 flying hours worldwide.

Leonardo has also been a huge supporter of NHV and we in fact became the launch partner of the Leonardo AW169 aircraft in the Oil and Gas market. Leonardo supported NHV when we opened the new base in Blackpool at the end of 2020 to provide passenger transfer services in support of their client's East Irish Sea operations.

Safran have also been working collaboratively with NHV since day 1. Up to 75 Safran Engines are powering our helicopter fleet and these engines have performed over half a million engine flight hours, often in critical missions also including EMS and SAR. 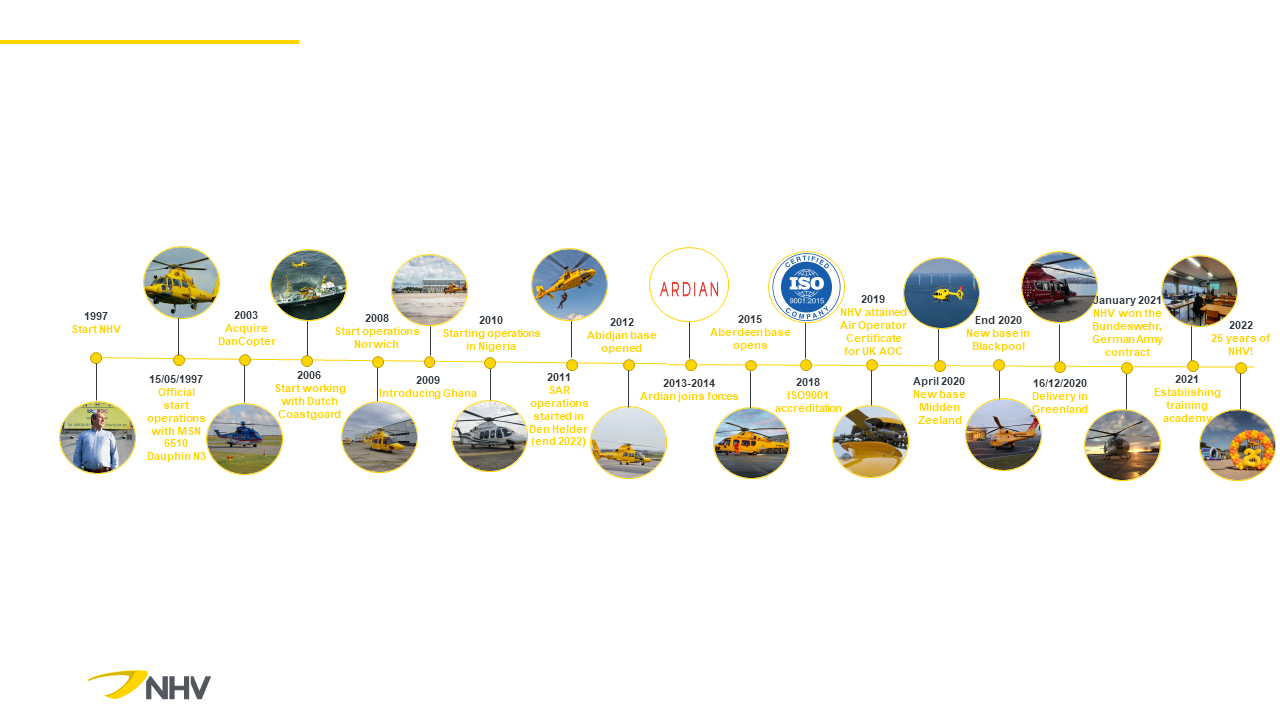