Our success story with the H175 commenced in 2014, when NHV Group became the launching helicopter operator for this Super Medium Aircraft type. Initially, the aircraft started operations from Den Helder, since then NHV has gradually expanded its H175 operations to our other bases in the North Sea and West Africa, where we have accumulated experience and attained optimum reliability with the aircraft. Today, NHV currently operates eight H175’s in Aberdeen plus two in Esbjerg.

This year, NHV Group also celebrates the milestone of 25 years of operation, growing from a family business into an international group with a reputation for highest levels of operational safety and customer service. We are delighted to have reached this noteworthy landmark as we consolidate our position in the oil and gas market where the H175 operates as the new standard.

“Since the H175 introduction at the end of 2014, with NHV as an early adopter, the aircraft has provided a safe and comfortable flight experience for passengers across the globe," adds Jerome.

NHV believes that the H175 is the most effective and modern helicopter available in its class today, and we are dedicated to further developing its strengths and potential. Neil Christie the Chief Pilot of NHV’s Aberdeen base comments, “It’s not every day that a company is able to celebrate a breakthrough such as surpassing 70,000 flight hours on a cornerstone type, but to have this occur during the 25th anniversary of NHV is a special event indeed!”

“The 70,000 hours have most recently included ferry flights around the UK and Europe; continuing COVID passenger transport and a multitude of flights dedicated to returning offshore workers, and our crews, safely home to their families. I have no doubt this stalwart of the NHV fleet will continue to give my colleagues and I many more hours of safe flight as NHV continues its growth towards our 50th anniversary and beyond.” 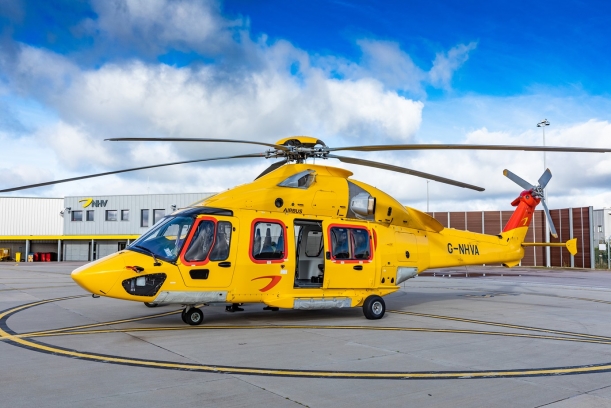 NHV Group, headquartered in Ostend Belgium, specialises in B-to-B helicopter services and operates with a strong geographic presence in Europe and Western Africa. The group conducts operations from several bases on two continents with a team of 500+ employees.

NHV’s main focus is on the energy-producing industry, including the Renewables Sector. Our scope of work also includes Maritime Services, Search and Rescue (SAR) and Harbour Pilot Services. Aside from the helicopter operations, NHV is an approved training organisation (ATO) and an official service centre for our partner, Airbus Helicopters. NHV also provides Maintenance, Repair and Overhaul (MRO) solutions.

In addition to supporting its fleet, NHV provides extensive third-party maintenance services to a variety of civil and military clients. The group has a multipurpose high-value fleet of over 40 helicopters.

NHV’s majority shareholder is Ardian, the world-leading private investment house with assets of US$120bn managed or advised across Europe, the Americas, Asia and the Middle East.

NHV Group has no Russian shareholders and is not involved with any Russian affiliated organisations in the delivery of helicopter services or aircraft spare parts.